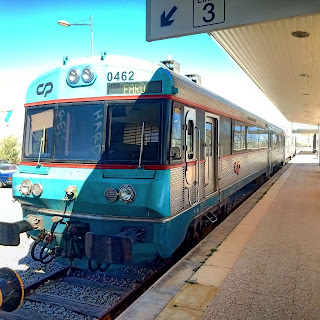 One of the problems of being from an Anglophone country is how we miss the nuanced pronunciation of others. Lisbon is a prime example. The English call it Lisbon. The natives call it Lisboa (Lish-boa). I came across this fact pretty late in my trip! Lisboa is the transport hub of Portugal, well connected by road, rail, air and ferries. It should have been easy to reach. But it wasn’t!
I had a pre-booked train ticket from Lagos for Lisboa. Only later I discovered that it was not a direct train! It required a change at a station called Tunes! (Don't confuse with Tunis – which is in distant Africa!) This caused some consternation and we planned extensively for the change. The railway station of Lagos is a smallish affair. It is the terminating station for the line from Faro. The train itself was a wonder. Graffiti covered every square inch of its exteriors. Inside it was quite comfortable. An hour into the journey we reached the interchange station. Here, it was clear that we were not the only ones making the journey to Lisboa! Almost all the passengers were making the change. The trains were barely five minutes apart and stoppage of fewer than two minutes! But when it came to doing it happened like clockwork! We smoothly made over to the next train. This was when we thought that our troubles were over, as only had to alight at Lisboa! We were mistaken! At Pinha Novo, about 40 km short of Lisboa the train stopped. There were repeated announcements in Portuguese and soon the train emptied.
We asked a few co-passengers. We came to know there were some track disruptions ahead and the train was terminated at this station! We were told to board another train, a suburban one. It would take us to as far as Coina. From there, the railway authorities would transfer us to buses to another station. From where we could resume our journey to Lisboa! This sounded like too much chaos. Apparently, someone had got wind of our impending invasion of Lisboa!
I started looking for cabs and there were none available! So we trudged to the platform. The suburban train was fairly fast and we managed to get to Coina! As we exited the station, I again checked the cabs. This time, I found one which would take me directly to our hotel for the princely sum of 40 Euros in about 30 minutes! I decided to take it. We reached our hotel at midnight. Nearly three hours later than expected. Our invasion of Lisboa finally was successful after many hurdles. Seeing the city would have to wait until the next morning!

Fabzania said…
Your entire series about these unexplored places is truly tempting for every traveler.
September 23, 2019 5:56 am

Preetjyot said…
Would love to add this place to my bucket list. I love visiting such unexplored places.
September 23, 2019 7:56 pm