A journey to Kutchh 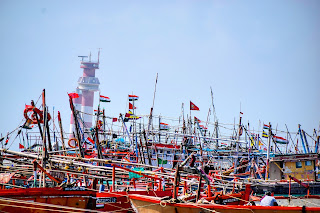 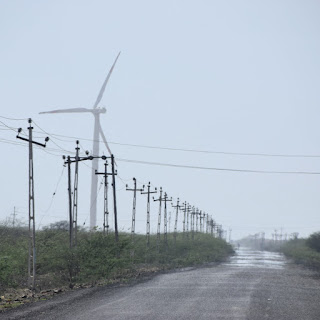 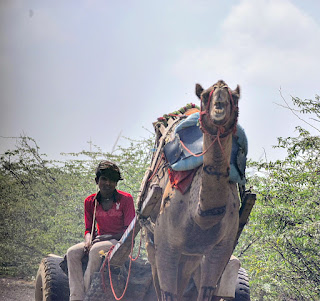 As one leaves the town of Bhuj westwards, a wide tarred road leads one into a vast flat emptiness. By mid morning, its not scorching but certainly hot. The road is emanating hot air and it hits one on the face with an unfamiliar warmth. There are shrubs of babool and kikar on both the sides of the road, but they are not tall enough to obscure the view. Albeit, there is nothing much to view. Flat land on both the sides. Featureless brown landscape interrupted by signs of sporadic cultivation and dwarf shrubs. Occasionally, one sees a concrete structure, typically single storied, one room affair. That is the only sign of human habitation. The road is straight and empty, devoid of any traffic whatsoever. The temperature is now high enough for mirages to form in the distance, at the far end of the road ahead. After a while, the journey seems like a dream. A hot, windy, bland dream. If there were an interstellar highway, perhaps it would be this.  One imagines a truck or a two wheeler in the distance, interspersed within the mirage, breaking its continuity. But even after minutes of driving at speeds of nearly 100 kilometres per hour, there is no sign of it. It is actually a mirage! Or a dream! Is there a difference? The only thing that seems to be connected with the reality are the milestones. They display names of unknown towns - Naliya, Jakhau, Narayan Sarovar. Only the kilometres on the milestone changes. After two hours of stuporose travel one hits the non-descrepit town of Naliya. If it were not for the milestones, one would not even notice the town. But here, there is a prominent Y junction. A bend in the road. A wormhole to a parallel universe. Or so it seems. But then, it is more of the same. Since we are now off the "National Highway", the road is a bit narrow and only more desolate. A shiny, chocolate brown Ambassador car appears from the cosmic dust and crosses one in speeds far excess of 100 kilometres per hour. Perhaps, one has actually broken the time barrier and is now in the past. An age of shiny Ambassador cars. The babool and kikar trees are now cloistered over sides of the road. They are trying to encroach upon the road. Trying to reclaim what was rightfully theirs. My companion asks me to steer clear of the thorny bushes, lest we land up with a puncture. My mind dwells on the possibility of a thorn being able to puncture a tyre of a SUV.  I remind myself that anything is possible during interstellar travel. And just to prove this point, an empty camelcart appears, driven by a sad looking teenager, wearing a red t-shirt with the playboy logo. The camel seems like it is grinning. But I don't know for sure. Soon in the distance modern reality starts to dawn. Hundreds of massive wind power turbines appear on the horizon. They are indeed looking like giants, right out of Don Quixote. We do not go tilting at the windmills though. They pass us by, a safe distance from the road. Each of the massive arms of the massive windmills move at a melancholic speed adding to the overall stuporous atmosphere. One tries to remember what one is doing here. Interstellar time travel? Or may be something more mundane? Reason escapes one's cognition. Suddenly clouds appear. The sky becomes overcast. These are not the rain bearing cumulonimbus but, the "castles in the air ", cirrus clouds.
We have reached the Middle School at Jakhau. It has a neat plastered perimeter wall, scribbled with slogans from the latest government schemes. There is a large iron gate, half open. Half a dozen cows and a couple of donkeys have made good opportunity of this half open gate. They are grazing in the field of this school, undisturbed. A clutch of about a hundred slippers lay outside the entrance, possibly of the pupils of this school. Inside, bright new orange bicycles procured through the state department of education are lined up neatly. I guess not one has been ridden, so far. The principal is a sombre man who is wearing a yellow baseball cap and smiles often. He has pictures of Mahatma Gandhi, Indira Gandhi, Subhash Chandra Bose, Swami Vivekanand and curiously, Rajiv Gandhi in his office. We soon exit his office and are on our way to Jakhau. The road deteriorates in between. The melee of the road and its mirage is broken. One starts observing other things. Several birds sitting on the electrical lines. Indian Roller Birds, Drongos, Kingfishers, Jungle Mynahs, Peacocks, all make their appearances. Soon, there are salt pans on both sides of the road. The salt pans are filled with water and there are black necked ibises, black winged stilts and various egrets. Farther away, the water seems pink and mountains of salts are drying. Soon, we are in the Jakhau fishing village. Hundreds of fishing boats lay anchored in the shallow beach. They are waiting for the monsoon to get over. It has been a tiring journey for an unspecified cause. But the rows of red coloured boats with the Jakhau light house in the background is a calming sight. May be, some day there would be a reason to such a journey. For today, there is only the sea and the boats.
Email Post
Labels: Gujarat Kutchh Road journey Travelogue