Portugal is a small country on the southwestern coast of Europe. Even in the Iberian peninsula, it occupies about a fourth of the landmass. Much dwarfed by its larger neighbour, Spain. But don’t go by its size. It punches much above its puny size on the world affairs. Or at least used. Its global colonial footprint also left its mark in India – Goa. In retaliation for its 500-year rule over Goa, I decided to invade it for five days. Well, technically not invade, it was a legal and peaceful entry.

After ten days in Spain, I board a bus from Seville. I will take me to Lagos in the sun-kissed Algarve province in Portugal. The ALSA bus is comfortable and half empty. There are some brits and possibly some Spaniards. Most of the tourists try the much more comfortable overnight train from Madrid to Lisbon. Since I wanted to include Lagos, I decided to take this bus. As European Schengen borders go, it is a seamless exercise. No checkpoints. No immigration. Of course, Portugal follows the GMT and is one hour ahead of Spain. It takes some time for my mobile to get used to the new timezone. A blink – and – you – miss Welcome to Portugal signboard. But there is indeed a physical border – the River Caia. I learn later, that it is one of the oldest international borders. It was demarcated some eight centuries ago. The landscape is more of the same but also subtly different. The low scraggy hills of Spanish side give way to short plains. As the road hugs the coastline, some spectacular views of the Atlantic Ocean. Soon we are making a pit stop for fuel in Portugal. Our first experience of Portugal is non-functional washrooms. We buy a piece of cake which turns out to be growing some suspicious mildew. We return it and the shop lady apologises in broken English. Soon we are in the town of Huelva which has a gallant bus station. There is a rush for the washrooms. The bus pulls out without much fanfare and we have to make a dash for it rushing from the washrooms. 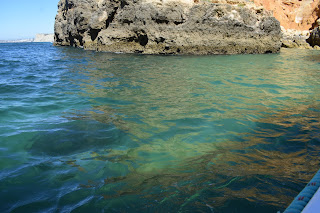 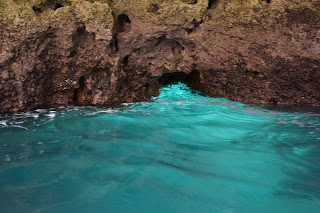 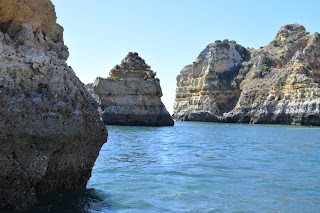 The town of Lagos is beyond the provincial capital of Faro. Unlike its namesake in Nigeria, it is a small coastal touristy town. We are staying at a large complex of apartment blocks. The 1 BHK furnished apartment is very convenient and its kitchen is fully functional! We check out the nearest supermarket store and, in our enthusiasm, buy huge stocks of grocery. The next morning, we take a boat trip to the limestone grotto caves. We board it at the large marina which has boats from as far away as Germany and Sweden. We pass by the ramparts of an old Moorish castle with old guns overlooking the ocean. 500 years ago these guns protected the Portuguese run slave trade from across the Atlantic. The castle apparently had a large slave market. No sign remains of it today. The caves are about half an hour boat ride away. The soft limestone has been gradually excavated over the millennia, by the turbulent sea . Myriad shapes and caves are the result. The pristine turquoise blue waters and the exotic shapes of the limestone caves offer a surreal atmosphere. The Atlantic ocean is turbulent. The boat crew person is testing our limits of adventure by speeding over the huge waves. One can also do a much gentler but exhausting canoe ride which can negotiate the narrow caves. Soon we are back for lunch and the nearby KFC helps. We trudge to the expansive Lagos beach which is sunny and crowded. After a while, we move back to our apartment for a siesta. We have got a train to catch to Lisboa in the evening. Our first day of the invasion is going well! Lisbon awaits our assault!

Rajesh k said…
I really enjoyed the post. want to appreciate you. you crafted the post so well with words. keep it up
September 21, 2019 12:30 pm

Ruchi Mayank Verma said…
This post somehow made me happy to read the way you crafted ...Thanks for sharing!
September 21, 2019 5:46 pm

Supriya H Mehta said…
I went to portugal virtually with the description in the post. Nicely described
September 21, 2019 5:59 pm

Arti_amidst berries of life said…
Portugal is in my wishlist, but through your post I think I'm already there.. still I want to go there some day:)
September 21, 2019 8:11 pm

Judy said…
Portugal is n my list seeing it in movies.. I am not sure why you had a slight discomforting experience but I am sure to be here soon.
September 22, 2019 12:11 pm

bushra said…
this look heavenly place to vouch for. That’s an intriguing read, Loved the post and your unique writing style.
September 24, 2019 12:07 am