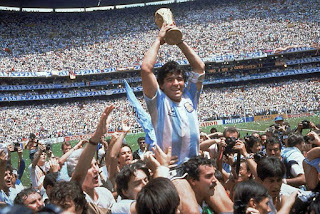 OK so Maradona is dead.

As the generation that truly transcends the Millenium, we have been spectators to quite a lot of confounding events. Perhaps the hallmark of our generation has been, hope followed by ecstasy and finally cynicism.

Maradona has been just one of the many who were archetypical of this curious cycle. As sportspersons go,  Maradona was truly a genius. But a flawed one. And after climbing the ladder to the stars he tumbled down fast enough. And yet, wonder and respect for him remained in our hearts for him. Our era has seen other sportsperson with similar meteoric rise and fall. Mike Tyson and Ben Johnson to name two others. We watched Johnson clock that impossible 9.79 in Seoul. Our school principal, Mr. Murthy, the next day, gave a motivational talk to the entire school based on this achievement. The euphoria lasted only a couple of days.

We as a generation had been brought up on stories of unblemished great feats in sports and in other streams. We were expected to better those in our lives. But in front of our eyes, we saw one giant after another tumbledown rather frivolously. Soon after the Johnson fiasco in Seoul, perhaps the greatest giant of our times disintegrated the USSR.

It was a very humbling and real commentary on the stories of greatness and successes we had been fed as kids.

And that made us all a bit disillusioned. And cynical. After that, no great feat could be felt with an innocent exuberance. Each star would be examined and questioned with skepticism. Today that skepticism has pervaded every walk of life. So much so that now it is difficult to tell apart what is true and what is fake.

Maradona, the genius, El pibe di oro, is no more! And with him is gone one of the most exhilarating moments of our childhood. Never to come back again.